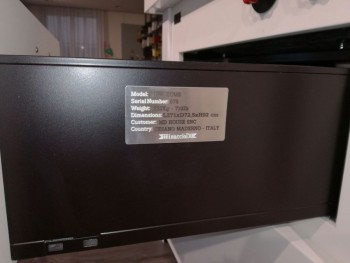 Minà combines the highest expressions of tradition and technology in a new-concept multifunctional island.

The essence and details of its form draw on the purest archetype and have strong proto-industrial connotations. But the suggestions of this bygone style, from the red knobs to the extraction hoods, are daringly modernised and the personality thus created will stand up to and dialogue with interiors of all kinds: modern, traditional and classic. A kitchen that becomes a “forge”, where fire is not just a cooking medium but a creative force. With island or wall-mounted layout, without limits on its size or modularity, Minà can be installed in rooms of all kinds: from the open space of a loft to the small city apartment.

Many touches combine to shape this new collection’s sophisticated design identity. Key amongst them are the unmistakable red knobs, which resemble the shape of the valves used on antique boilers but are now used to light and regulate ovens, hobs and latest-generation taps.

Minà is a multifunction island able to take ovens, refrigerators, freezers, dishwashers and drawers fitted with racks and trays or recycling containers. Everything needed in the kitchen can be concentrated in a single island.

Every Minà kitchen is designed and built ad hoc for the individual Customer, in a genuine tailor-made process. Every one is a unique, collector’s item. In fact, each one is marked with its own specific technical data and the name of the Customer who commissioned it.

This website uses cookies to enable it to be navigated efficiently, to analyse user visit statistics, and third party cookies to send you advertising messages consistent with your preferences.